A news story in the Daily News from Tanzania on January 24 analyzed the sexual health and reproductive rights of women and girls in Tanzania with a special focus on the Fipa people. While the Fipa are not identified as such, the opening example narrates the traumas of a girl who recently had an abortion and continues to live with her parents in the Lake Rukwa basin of the Rukwa Region, which is part of the traditional Fipa territory.

The story that 16-year old Hawa, a pseudonym, shares with the journalist is that she was dating a middle-aged, married man and she was not using any contraceptives. She didn’t have access to them. When she realized she was four months pregnant, she told her boyfriend, but he became quite angry.

He insisted that she have an abortion and she refused. He increased the pressure on her to abort the fetus until she finally gave in to his demands. She experienced terrible pains; after she had the abortion, she was ill for about a month. She thought she was going to die.

When she was asked if she used any family planning methods, she replied that she was still dating the same married man and having unprotected sex with him. She went on to say that she had visited a friend of hers who had ended a pregnancy at 7 months, and the friend gave her some unknown tablets. It turned out they had been given to her by the boyfriend.

The article takes off from that story to explore the access to health care available for women and girls in Tanzania today. The statistics cited are sad. Less than 10 percent of sexually active teens use contraceptives to avoid pregnancies. Among girls 15 to 19 years of age, 22.8 percent are either pregnant or they are already mothers. These figures and the ineffective measures that different agencies and officials are using to address the problem clearly apply to the Fipa as well as to the rest of the girls and young women in Tanzania. 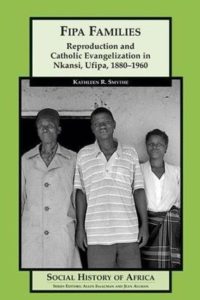 The available ethnographic literature on the Fipa doesn’t provide much useful background information. The most interesting work is Smythe’s book Fipa Families (2006), which provides some interesting clues about attitudes toward girls in the last century.

Some families sent their daughters to a Catholic boarding school at Karema, near Lake Tanganyika, so they could get some formal education. One official complained that the girls were using their ability to read and write to send “affectionate notes” (p.76). This was at least 100 years ago, long before unprotected sex with partners who were married to others became acceptable.