Location. About 30,000 Mbuti Pygmies used to live in the Ituri rainforest of northeastern Congo , though many have fled to safety in resettlement camps near the Congolese city of Goma to escape the incessant fighting by militias and armies in their forests. Colin Turnbull, in his world famous book The Forest People (1961), described the net hunting Mbuti, who subsist in the heart of the Ituri, and particularly the families who lived in the Epulu area.

Economy. For the people who remain in the Ituri Forest, much of the year they engage in their traditional forest hunting and gathering, but part of the year they also live with nearby farming villagers for whom they provide labor in exchange for outside goods and garden vegetables. The Mbuti who have moved to resettlement camps near Goma fabricate goods for sale or hold day laboring jobs in the city. A wonderful film about Mbuti life in the Ituri Forest, made in 1990, was uploaded to YouTube in 2013.

Beliefs that Foster Peacefulness. The Mbuti view their forest as a sacred, peaceful place to live—they constantly refer to it with not only reverence but adoration. They sing songs to it, in appreciation for the care and goodness they feel they get from it. If something goes wrong in their camp at night, such as an invasion of army ants, the problem is that the forest is sleeping, so they sing to awaken it. Their songs of rejoicing, devotion, and praise serve to make the forest happy. They do not believe in evil spirits or sorcery from the forest as the nearby villagers do–their forest world is kinder than that.

Avoiding and Resolving Conflict. Normally the Mbuti settle conflicts with quick actions. One of their major strategies is laughter, jokes, and ridicule. The camp clown, an individual who assumes the responsibility of trying to end conflicts through ridicule, uses mime and antics to re-focus the conflict on himself, to get everyone laughing and ridiculing, in order to divert attention from the issue of the moment. The Mbuti have no formal methods for resolving disputes or crimes, and no individual would pass a sentence on another. But if one person is clearly in the wrong, an entire camp can react by punishing, perhaps even thrashing, an offender. Sometimes parties to a dispute might settle it through arguments or mild fighting. Ostracism is always a possibility, but it is rare.

Gender Relations. Mbuti men who still live in the Ituri Forest organize and control the net hunting, though the women help them. The women gather vegetable foods in the forests, such as mushrooms (see photo), but the men will help out. The women freely join discussions with men, though tensions between the sexes do arise. One strategy they use to diffuse gender tensions is to have a “tug of war,” the men and boys opposite the women and girls. If the males begin to win, a man will leave his side and join the women, mockingly encouraging them in a falsetto voice. When that group begins to win, a woman drops off her side and joins the men, encouraging them in a deep bass voice to greater efforts. The fun and ridicule grow as the contest continues, until everyone dissolves into hysterical laughter. The effect is to ridicule aggression, competitiveness, and conflict itself. Both sexes will do whatever they can to survive and support their families in the refugee camps. 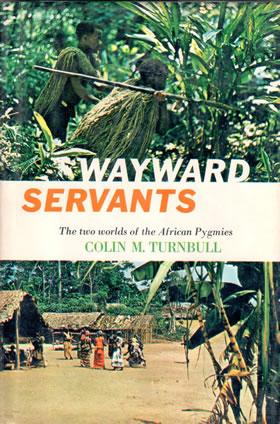 Raising Children. A Mbuti mother develops a special lullaby that she starts singing to her baby while the infant is still in the womb. She reassures the child about the world into which he or she will soon be born, with descriptions of the goodness of the forest and the supportiveness of the human environment. As they grow older, children learn to play non-competitive games that emphasize cooperative activities. Sometimes children are spanked and slapped by their parents.

Social Practices. When the band moves to a new location in the forest, people take advantage of different layouts to establish the most diplomatic possible arrangement of huts in order to help minimize disputes. Conflicts that are serious enough will result in the camp dividing, with sub-groups splitting off to form their own hunting bands if they possibly can. During the annual honey-gathering season, the bands completely dissolve into numerous groups foraging many miles apart, which resolves most remaining disputes. If any conflicts remain after honey season, when the bands must form again to resume their cooperative hunting, dissident segments may take the opportunity of joining new bands elsewhere. It is not yet clear how the refugees in the camps near Goma settle their conflicts.

Cooperation and Competition. Cooperation is essential for the success of the hunt, at least as practiced by the net-hunting Mbuti. The men join their lengthy nets together in a wide arc in the forest, each man stationed near the middle of his net, and the women form a large circle, beating noisily in toward the nets when the signal is given. The men cooperate in killing animals that are trapped in the nets—and normally several animals will be trapped and killed with each hunt. The wives of the men whose nets trapped animals get to carry them back to camp in their baskets and share them with the others.

Sharing. The sharing of meat taken in a hunt is usually accompanied by a lot of squabbling, not only about unfairness of portions but also about other unrelated grievances. But this is an effective way of airing grievances, since nothing can interrupt the cooperation of the hunt the next day, on which everyone’s survival depends.

Strategies for Avoiding Warfare and Violence. Different groups of Pygmies try to avoid warfare with one another. One incident that occurred during the honey-gathering season indicates this tendency. With everyone spread out through the forest in small groups to gather the honey, the Mbuti suddenly realized that a foreign Pygmy group had invaded their territory and were stealing honey from their trees. One man became excited and tried to summon everyone to make war on the invaders. But another man explained that they invade each other’s territories every year, and no harm is done as long as the different groups don’t encounter one another. If they do have a chance encounter, the invaders simply flee back to their own territory, leaving behind everything they have stolen.

But How Much Violence Do They Really Experience? Colin Turnbull, author of The Forest People (1961), also wrote Wayward Servants (1965), a more detailed book in which he recorded 124 disputes in one Mbuti camp during his year of living with them. His listing does not count the daily, petty squabbles that reflect people’s bouts of bad temper. Over half of these disputes were concerned with food, while others involved sex, relations with the Bantu villagers, theft, and territory. While a careful reading of the 35 specific disputes that he describes in detail might seem like a catalog of constant fighting for very trivial reasons, the people acted out most of their conflicts, serving to dissipate their problems before they became too serious. It is not clear how much violence they experience today, particularly in their resettlement camps near Goma.