Since most peaceful societies exist as minorities within larger, more forceful, nation states, they are influenced by the whims, conflicts, and violence of the majority peoples. The Ladakhi, though relatively isolated in their mountain valleys, are very much part of the tensions that affect the rest of the state of Jammu and Kashmir, in northern India. The government of India took one initiative last October to reduce tensions in the region by appointing a panel of three interlocutors to investigate possible solutions to the conflicts. The government is about to take another.

The Union Home Secretary in New Delhi, Mr. G. K. Pillai, announced on Friday last week that the government is thinking about making a 25 percent cut in troop strength in Jammu and Kashmir over the next year. He made his announcement at a symposium, “The Way Forward in Kashmir,” which was organized by the Jamia Millia Islamia University in the capital city. He told the attendees that the local police forces in the state should be able to handle security in its urban areas.

He said that military forces should primarily be positioned to provide security in border areas. Further, he indicated that the government is planning to issue six-month, multiple entry visas so people living in the portion of Kashmir controlled by Pakistan can visit relatives in Indian-controlled Kashmir. He also expressed his hope that the interlocutors would be able to present their final report by April. 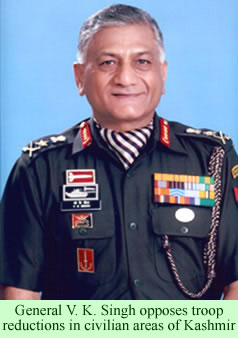 The Indian army quickly registered its discontent with the government’s peace feeler. General V. K. Singh, Chief of Staff of the Indian Army, said shortly after the report of Pillai’s announcement that he was opposed to the concept of reducing forces. Speaking at an annual Army Day press conference, the general did not comment about the context of some of Mr. Pillai’s remarks.

He did, however, express publicly his opposition to the heart of the government announcement—reducing troop strength in heavily populated zones. “In the interior areas, to maintain peace and carry out operations against the militants, we have some troops. As of now, we do not feel we should reduce the numbers,” General Singh said.

Perhaps anticipating internal opposition to confidence-building measures, Secretary Pillai also said that the basis for stationing troops in a state like Jammu and Kashmir was the Armed Forces Special Powers ACT (AFSPA). The law applied because the state government had declared the state to be a “disturbed” area. If the state government were to make a “leap of faith,” Mr. Pillai said, and declare that portions of the state are no longer “disturbed,” then the provisions of AFSPA would no longer apply.

Confidence building measures such as the proposed army reduction will not affect the Ladakhi villages immediately, but in the long run, a stronger tilt toward peace by major actors in the northern corners of India could at least help preserve the existing peacefulness at the village level.