The Hutterites of the Forest River Colony, in eastern North Dakota, have been in the news again—at least in the Herald from the nearby city of Grand Forks. A reporter from the paper, Marilyn Hagerty, went out to visit the colony, about 22 prairie miles northwest of the city, to spend a day and get a feeling for life there. 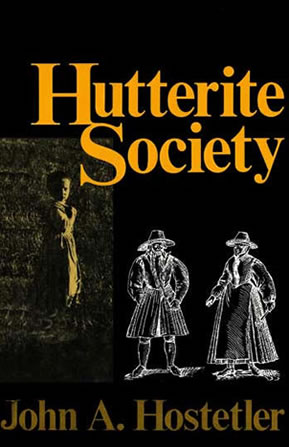 She did not mention the fascinating history of Forest River. John Hostetler, in his book Hutterite Society, described the role of that colony in developing connections between the Hutterites and the Society of Brothers, also called the Bruderhof movement. The Society of Brothers began early in the 20th century when Eberhard Arnold, a charismatic German theologian, became convinced Christians should live in communal societies patterned after that of the early apostles.

Arnold was inspired in the 1920s not only by the New Testament Book of Acts, but also by the Hutterite history—Anabaptists in 16th century Switzerland who had followed the same example in Acts to establish their own communal lifestyle.

Then, he discovered that the Hutterites still existed. They lived in the plains states of the northern U.S. and the neighboring prairie provinces of Canada. He traveled from Germany to America and visited the colonies. Impressed by their visitor, the Hutterites accepted the new group in Germany as a kindred peaceful society, since they appeared to have many similar beliefs.

Later in the 1930s, with the rise of the Nazi movement in Germany, the Brothers moved to England. After the Second World War started, however, they had to flee to Paraguay to avoid English discrimination. They spoke German, after all. Sporadic contacts continued between the Hutterites of North America and the Society of Brothers in Paraguay, though many differences between the two groups became evident. In fact, a joint meeting in 1950 resulted in most of the Hutterites becoming convinced that the beliefs and practices between the two groups were not similar enough to permit any sort of union.

However, some members of the Forest River Colony had a different impression. They invited the Brothers to leave Paraguay and join them in their colony in North Dakota. The Schmiedeleut, one of the three major divisions, or leuts, of Hutterites, were quite distressed by the actions of the colony. Their concerns proved to be justified—the migration of the Brothers into Forest River were nearly disastrous. According to Hostetler, 36 members of the Society of Brothers moved into Forest River—teachers, nurses, ministers, lawyers—and basically took over the place. The resident minister fled, along with 40 of his supporters.

The Schmiedeleut ministers met in 1955 and excommunicated the Society of Brothers. They put Forest River on probation for causing problems of division and disunity in the leut. The Brothers finally decided to leave Forest River and move to a new colony in Farmington, Pennsylvania—and 36 Hutterites went with them. Other Paraguay Brothers had meanwhile dismantled their colonies in South America and moved to new locations in the U.S., most notably one near Rifton, N.Y. Over the years since, apologies have been made between the Hutterites and the Bruderhof. They have maintained an off-again, on-again relationship, but the differences in style and substance have been too great for a formal union to persist.

The reporter for the Grand Falls newspaper did not note a much more recent book about the Hutterites, which also mentions the famed Forest River colony. The Hutterites in North America, by Janzen and Stanton (2010), updates the history of Hutterite—Bruderhof relations. But regarding Forest River, the book concentrates on describing the condition of its modern housing. The authors visited the dwelling occupied by Tony and Kathleen Waldner and their children which, they say, is typical of many colonies. Mr. Waldner is the German teacher at the colony. He lives with his wife and children in a modern home with six bedrooms, two modern bathrooms, a modern kitchen, and other rooms, all evidently furnished nicely.

Waldner also hosted the news reporter from Grand Forks when she visited the colony in late July, and her reports, both on August 7 and again on August 13, focused on the vegetables and fruits produce in their gardens. They freeze and can enough foods to tide the 100 residents over the long winter months. Unlike the Amish, the Hutterites do have electricity in their homes. They sell their surplus foods at a weekly farm market in Grand Falls.

Ms. Hagerty describes the ample meals shared by the Forest River members, plus the enthusiastic comments by her hosts about the foods they enjoy. She indicates that they do not have televisions, but they do have computers and radios in their homes.

Mr. Waldner, who also supervises the colony gardens, tells her that they farm 4,000 acres, some of which is bottom land along the Forest River where they have a 16 acre garden. They have a large greenhouse to extend the growing season. He told the reporter that they sell eggs and other surplus foods, raise hogs, and operate an industrial demolition and salvage business to raise money.

Ms. Hagerty is clearly most fascinated by the way the colony preserves food for the winter. They make and preserve salsa, pick juneberries, put up green beans—200 to 300 quarts—and add vegetables to their freezers. One day recently, they put up 150 jars of raspberries, to add to their 120 jars of chokecherry jam and 40 jars of chokecherry syrup.

Their field crops include 800 to 1000 acres of potatoes, 2000 acres of corn, and 200 acres of carrots. They grow fields of tomatoes, beets, zucchinis, horse radishes, and peppers. Mr. Waldner pointed out the plantings of cantaloupes, broccoli, and cabbages. They use the cabbages to make their sauerkraut. After all, he told her, “we must be Germans!”