Lye Tuck-Po visited the Batek once again over the long New Year’s weekend, and as usual she has posted some wonderful photos to her blog, including some charming ones of children and young people. 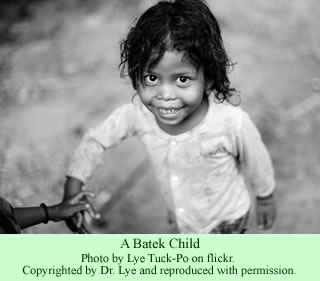 She no sooner returned to her home than she began posting her pictures. The first, on Friday January 6th, was a black and white image of a little girl. The child, who appears to be about five years old, has a whimsical smile as she reaches for the outstretched fingers of another kid who is not otherwise visible on the left.

Dr. Lye says in an email that she believes the child is named Apoy.

The next day she posted a video montage which she titled “With Batek at Was Yong, Taman Negara, 2012.” It consists of brief videos and still photos taken during the visit. The voices of the Batek themselves predominate, so we can get to hear their spoken language as well. Dr. Lye tells us that she spent a few splendid days with her friends while they dug for yams and fished.

She says that she used a boat on the Tembeling River to visit people, and she was able to catch up on the news with some folks she had not seen in 15 years. The “children were adorable,” she comments. When she learned that one elderly friend had died only three days after her visit in 2010, she realized once again how important it is for her to keep repeating her visits with these people.

On Sunday January 8th, she posted a black and white photo of a toddler holding on to his mother’s finger and trying to climb over a fairly large log across the path. Even from behind, his body posture shows him struggling, holding his little digging stick in his right hand in the effort to climb over the obstacle.

She also posted on Sunday three “then and now” photos, of adults during her most recent visit, who were children during her visits in 1996 and 1999. Particularly appealing is a photo of a young man, eyKameng, who is shown a few weeks ago with a big smile, a proud young father with his son. The photo can be appreciated better in flickr. To the left of the photo on her blog we see the same man as a youth making some darts for his blowpipe.

On Thursday the 12th, Dr. Lye posted a brief video she made which reconstructs her visits to Batek campsites throughout the Kechau and Tembeling river valleys of Malaysia’s Pahang state while she was doing her initial fieldwork. She uses a trial version of Google Earth Pro to show the various campsites she visited from July 1995 to November 1996.

The Google Earth technology makes it appear almost like a video camera is moving over the Malaysian forest, hovering over each site that she visited. Lye intersperses in the midst of the moving Google Earth video some of the still photos she had taken of people and activities on the ground. It all takes 2 minutes and 38 seconds. The work creates an impression of forests that remain intact and people who still live within them.

Last Friday, the 13th, she posted four black and white pictures of kids, three of whom are climbing trees—skills, she says, that they learn early. When the children try to climb a tree that is too large, adults will simply shout at them.

She indicated in her email that when she has the time, she has numerous other photos to process and add to her flickr account and her blog, both of which are well worth revisiting frequently. From her many return visits with these people, we learn that the Batek traditional culture is surviving fairly well. In addition to her 18 months of field work, Dr. Lye has revisited them in 1998, 1999, 2001, 2003, 2004, 2005, 2010, and, most recently, 2011-2012. She wrote that she plans to keep going back. Great news.