A few days ago, Duane Stoltzfus of Goshen College delivered a lecture describing the way the American Army in 1918 tortured two Hutterites to death because they refused to fight. This story of American extreme human rights abuses highlights what can happen when a majority society refuses to tolerate the peacefulness and nonresistance of a minority group. 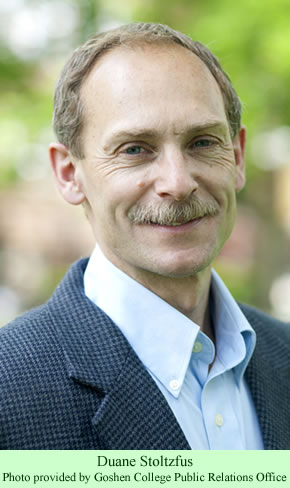 Dr. Stoltzfus, Professor of Communication and Chair of the Goshen College Communication Department, presented his paper “Standing in Chains at Alcatraz: When the Hutterites Were Called to War” at Bluffton University, in Bluffton, Ohio, on February 28th. He delivered the lecture again at Goshen College, in Goshen, Indiana, this past Monday, March 12th. He followed the Goshen lecture with a slide presentation on March 13th. The lectures were part of the annual C. Henry Smith Peace Lecture series.

The story that Prof. Stoltzfus told about the Hutterite martyrs is quite sad, but instructive. John Hostetler’s book Hutterite Society provides a similar account to the detailed report about the Stoltzfus lecture that appeared in a Bluffton paper. Four Hutterite men—Jacob Wipf and the three Hofer brothers, Joseph, David, and Michael—were required by law to report to Fort Lewis, near Tacoma, Washington, for induction into the U.S. Army. On the train ride out to Fort Lewis, in May 1918, they were attacked by soldiers, who cut their hair and beards. When they arrived at the fort, they told the military authorities that they would not fight.

Their commitment to peacefulness was founded on their belief in nonresistance. They would not serve in the armed forces. Their faith required them to follow to the letter Christ’s injunctions in the Sermon on the Mount. They had to turn the other cheek in all encounters. They could not resist evil, hence the term “nonresistance.” After America entered World War I, other pacifist groups also refused to fight, despite the pro-war hysteria sweeping the country.

But some of them, such as many Mennonites, were willing to serve in support roles, as ambulance workers or other kinds of helpers to the armed forces, just so long as they did not have to carry rifles or fight in the trenches. Not the Hutterites. Their consciences, their beliefs, would not permit them to even don uniforms or accept orders.

At Fort Lewis, the four men refused to even sign registration papers. As a result, they were sent, for two months, to the guard house at the fort, steadily refusing to compromise their beliefs. Then, they were sentenced to 37 years in prison. The guards shackled them and took them to Alcatraz, the infamous prison island in San Francisco Bay.

There, they still refused to put on uniforms. Guards gave each man a uniform and told him he would remain in solitary confinement, in a dark, filthy dungeon, until he died. For four days they had to sleep on the cold, wet concrete floor wearing nothing but light underwear. They were fed half a glass of water each day but given no food. The guards tied their arms and hung them from the ceilings so they could club them more easily.

After five days, the guards released them for a short time from the dungeon, but when they emerged, they had so many insect bites and eruptions on their skins that they were unable to put on their own jackets. During the next four months at Alcatraz, they were allowed only one hour per week of outdoor exercise, on Sunday afternoons. They continued to refuse to obey any orders.

Army officials decided to transfer the four men to another military prison, at Fort Leavenworth, Kansas, north of Kansas City. Six guards shackled the men and took them by train to Leavenworth. From the train station, they prodded them with bayonets through the streets to the prison. There, the guards required them to remove their clothing and forced them wait for a couple hours until they were allowed to put on prison garb.

The next morning, the four again were required to stand outside in the cold. Finally, two of the men, Joseph and Michael Hofer, collapsed. The guards took them to the prison hospital and put the other two, David Hofer and Jacob Wipf, on a starvation diet in solitary confinement. They forced those two to stand nine hours each day, then tied them up so their feet were barely touching the floor.

However, according to Hostetler’s account, Wipf was able to get away briefly and send a telegram to the wives of the two men who were seriously ill, telling them what was happening. Stoltzfus said that prison officials notified the wives. Due to mix-ups on the train line, it took the women two days to reach Leavenworth. Their husbands were nearly dead when they arrived at the prison hospital late at night on the second day. They were not allowed to see them.

The following morning, when the two wives arrived at the hospital, they learned that Joseph Hofer had died during the night. The guards even refused to allow his widow to see her husband’s body. She pleaded with the colonel in charge and he finally relented. Mrs. Hofer found Michael’s body in a casket, dressed in the military uniform that he had refused to wear while he was alive.

Two days later, Joseph Hofer also died. The two wives, with David Hofer, the third brother, accompanied the two caskets back to their home colony. Wipf remained in solitary detention, though Secretary of War Newton Baker quickly ruled that chaining prisoners so they would have to stand in the jail was no longer permitted. Wipf would remain in prison until April 1919.

The word of what had happened quickly spread through all the Hutterite colonies in the United States. The U.S. Army had tortured two men to death because they refused to fight. The Hutterites began to sell their colonies and move north to Canada, where they had been assured they would be welcome. Where they would not be forced to fight in the Canadian armed services.

Professor Stoltzfus concluded that the experience of torture was not a simple one of good versus evil. The nasty experience did teach Americans that they needed to do better, he argued, to more effectively respect the freedom of religion of minority groups.