Karthik Navayan posted a most interesting news story last week exposing the corruption of the upper class land barons in the Indian state of Andhra Pradesh who have deprived the Yanadis of properties that rightfully belong to them. 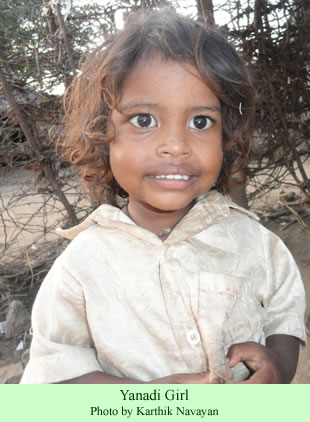 He told his intriguing story on March 26 on his own blog and on the website of Round Table India, a group devoted to providing information about, and a platform for, the Dalits, the so-called untouchable people of the Subcontinent.

Mr. Navayan, a South Asian human rights activist, tells how Tupakula Munemma, a Yanadi woman who gained some fame over three years ago in a failed run for the legislature of Andhra Pradesh, received a package in 2006, apparently by mistake, which contained evidence of people cheating the Yanadi out of land allotments in the Nellore District of the state.

An activist for a local human rights group called the Association for Rural Development (ARD), she took the package to Shaik Basheer, the Director of the organization. The parcel, sent by the Revenue Division Officer, contained land documents for parcels that appeared to have been assigned, under several different government programs, to Yanadi families in the district.

Mr. Basheer proceeded to investigate. He obtained other documents and concluded that many tracts of land had been grabbed by the local landlord caste, the Reddy families of Andhra. Navayan indicates that the well-intentioned attempts of government agencies and Christian groups to help the Yanadi have had little impact on the lives of the people. The Yanadi, he writes, are a scheduled tribe. Some still live semi-nomadically, but most subsist on local hunting, fishing, and domestic labor. Few receive any education.

Mr. Basheer estimated that the Reddies had cheated 127,000 acres of land from the Yanadi. Basheer trained the staff of the organization on how to verify land documents obtained from a variety of official Nellore government sources. The 14 activists from ARD took the materials out to the villages to compare with conditions on the ground. They wanted to find out who had encroached on the lands that rightfully belonged to Yanadi families.

After verifying the issues related to the parcels in question, the activists then began working to reclaim them. The process is involved. They first have to pay a fee to the Mandal Revenue Officer, an official that oversees the needs of the Dalit peoples, and request a document about each parcel.

Then, they pay a much higher fee at another office and request that it send a surveyor to formally identify the owner of the particular parcel of land. The surveyor usually comes after at least 10 different requests, and 10 different payments, have been made.

Once the survey is completed and the parcel boundaries formally declared, the ARD, operating in behalf of the Yanadi family, has to pay another fee to get the Mandal Revenue Officer to issue the proper deed. The ARD, according to Navayan, has so far assisted 1,359 Yanadi families in the district to acquire, or reclaim, lands that rightfully belonged to them. The parcels amounted to 2,031.12 acres. Another 4,737.1 acres is in progress for an additional 1,832 families.

Mr. Basheer, the leader of ARD, built the process slowly, according to the news story. He spent years raising the consciousness of the Yanadis to their rights to land, and developing an awareness of their needs in the minds of Nellore District government officials. He also succeeded in gaining the necessary political support in the district. The politicians have become quite supportive of the process of redressing the wrongs that the Yanadi have suffered.

However, the ARD efforts are not without their challenges. The Reddy groups who are being deprived of lands they have illegally seized have issued death threats against the ARD staff and its director. Navayan indicates that the source of the corruption is in the lower level revenue officers, who have been colluding with the Reddies to divert the land titles. Reddy family members, many of whom employ Yanadi workers, are threatening to stop giving them work and patronage.

Navayan cites several instances of the Reddy intimidation. In Kothapeta village, a Reddy threatened to murder the ARD representative if he continued to work with the Yanadis. ARD activists are in danger but, the author writes, they are not backing down. They have complained to the Superintendent of Police and the District Revenue Collector.

The author concludes that the fight with the land barons of Andhra Pradesh, and particularly the ones in the Nellore District of that state, are not over by any means. But the Yanadi, with the help of the very active social service group, are making progress in getting titles to properties that are rightfully theirs.