Anthropologists have characterized many hunting and gathering societies as “immediate return,” a phrase that describes people who consume their food immediately since they have no way of accumulating and storing surplus. Such foraging societies often lack competition and are highly egalitarian. The Chewong certainly fit that description. 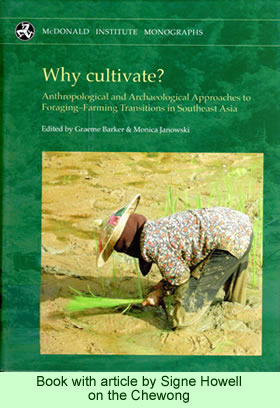 In contrast, “delayed return” societies, especially peoples who practice settled agriculture, have economies based primarily on accumulation and savings. They tend to have social systems that emphasize the ownership of land, the accumulation of personal wealth and, frequently, the establishment of hierarchical orders and social inequalities. The Malay and Chinese peoples who live in the rural valleys of Peninsular Malaysia surrounding the Chewong forests have been settled agriculturalists and traders for many years.

Signe Howell, writing an article published in a recent book on the relations between foragers and agriculturalists in Southeast Asia, explores the effects of the settled Malaysian peoples on the Chewong. Her piece brings to life the importance of looking carefully at the economic ways of a society like the Chewong in order to better understand the possible changes in their peacefulness.

For while Chewong society appears to be evolving, they also seem to be retaining at least some of the stabilizing factors from their traditional culture. Their world has been opened up by outside forces in recent decades, first through invasive logging, then from pressures by government agents, missionaries, and traders that they should join the Malaysian state society. The Chewong are resisting those pressures, at least to some extent.

They define themselves as hunters and gatherers. Their terms for themselves are bi breté (forest people) or bi bay (digging people), and they explicitly contrast themselves with neighboring farmers. However, Howell has noticed in her recent visits with them that they no longer use as much forest land for foraging and hunting as they did in the 1970s when she did her first field work there.

Many Chewong have settled into a permanent village, but others are less inclined to do so. They are ambiguous in their feelings about staying in one house more or less permanently. While they want to take advantage of new opportunities, such as foods that are easy to purchase, or attractive technological gadgets, they also want to retain the best of their former world—the stability and peace of the forest.

One of their primary, long-term cultural values has been to condemn people who eat alone. A person who eats alone violates their supreme principle of sharing food. A Chewong who did eat alone, who violated such an important rule, would never be punished by humans, but the superhumans certainly would condemn the action. For the human and the spirit worlds are co-existent to the Chewong.

Traditionally, all produce caught, trapped, or gathered in the forest would be brought back to the community and shared according to very exacting rules. The people had no way to preserve food, and no knowledge of how to do so anyway. Eating alone is symbolic of cheating on the system. However, foods that people purchase from outside sources—for instance, from a store in the village using personal earnings—are increasingly falling outside those social rules. To some extent, they can now eat alone.

But they still have not given up their “immediate return” way of thinking. Some Chewong are raising and selling cash crops, though they quickly spend their earnings. An accumulation of wealth is alien to them. The immediate return implied by their subsistence economy is modifying into an immediate spend mentality today.

They will work hard to raise money to purchase rice, or to afford the costs of a wedding. But unless they have specific items they want to buy, they rarely save for long-term goals, much less for unforeseen circumstances. Their attitudes are a hold-over from their hunting and gathering heritage. When they need something, they will get up, go out, and work for it. As a result, the process of developing agricultural crops that require long-term planning and harvesting is still not attractive to them.

Their sharing lifestyle fostered a belief in equality in which no one could hoard, or accumulate, wealth. They believe in punén, the conviction that hoarding would prompt dangerous desires in others who might became envious or resentful. That state of punén could provoke the attacks of tigers or poisonous millipedes. The violator of the punén rule, thus, was responsible for the attacks. The culture, in other words, strongly condemned selfishness, and maintained equality through those punén sanctions.

The introduction of money has changed the rules. As the people have begun establishing rubber plantations near the village, or developed permanent farming plots, they have begun considering the tracts of land on which their crops are planted as their own. Individual land ownership was alien to them not many decades ago. People who now accumulate lands, and consumer goods, are becoming wealthy. Money carried home in the pocket is not visible, while a game animal carried back into a forest clearing most definitely was. Inequalities are springing up.

Wives whose husbands are out working and earning cash are less equal in the homes than they used to be, when men and women were both bringing home food for the family. Men are increasingly becoming the decision makers in the homes. Furthermore, some men are better able to earn money than others, so the inequalities between Chewong families is becoming more noticeable. So far, Howell observes, there have been no dramatic changes, but she notices these gradual shifts.

But Howell believes that the traditional values of the Chewong are deterring them from becoming active, enthusiastic agriculturalists. They periodically, in some case frequently, like to return to the forests. Those habits inhibit the long term care required for plantation agriculture. Their earlier practice of sharing, plus their inclination to immediately spend their money on food or consumer goods, are slowing the change into a farming lifestyle.

Living permanently in the forest, yet having access to some consumer goods, may seem ideal to many Chewong, but it is not clear how much they will change. Some may well continue to prefer the peacefulness of the forest over the attractions of the TV.

Howell, Signe. 2011. “The Uneasy Move from Hunting, Gathering and Shifting Cultivation to Settled Agriculture: The Case of the Chewong (Malaysia).” In Why Cultivate? Anthropological and Archaeological Approaches to Foraging-Farming Transitions in Southeast Asia, Edited by Graeme Barker & Monica Janowski, p.95-104. Cambridge, UK: McDonald Institute for Archaeological Research, University of Cambridge.