Competition is anathema to some of the peaceful societies, such as the Kadar, Semai, Piaroa, and Chewong, where people fear it might provoke resentment, anger, and even violence. For other peaceful societies, it is simply a harmless and enjoyable part of life. Tristan da Cunha is one of those places, where the spirit of friendly competition prevails. 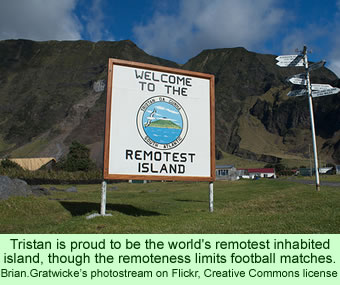 A news story on Friday indicated that the Tristanians enjoy golf matches, and another several days earlier reported on football on the island. The islanders are obviously enthusiastic about their competitive sports.

A football (soccer in the U.S.) blog early last week carried an interview with the man who coordinates that sport on Tristan. Christian Rizzitelli spoke with Leon Glass, labeling him as “the remotest manager in the world,” on “the most remote island of the world,” to get his views on the place of football on the island.

Glass indicated that it is difficult, considering the small population of Tristan—just 260 people—to field two teams of 11 on each side. So they usually play with just five people per team. But the play is very competitive. He said that the sport was either introduced by visiting missionaries, or by personnel on visiting ships, though he wasn’t sure when.

Asked if Tristan has a national team and plays matches with other places, Glass replied that the island doesn’t have the population, or the funds, to send a team abroad. “So all our matches are classified as friendlies,” he added. Asked if he had plans for the 2012/13 football season, he replied that the scheduling of their matches varies—but they do try to train at least once a week to keep in shape.

Mr. Glass said that the Tristanians play against the crews of visiting ships, perhaps three to six matches per year. In 2012, however, they only had one football match, and that was between a team fielded by the government employees, against another from the fish processing plant. The government won, 2 to 1.

Rizzitelli asked Glass if the Tristanians would like to play against other South Atlantic islands, such as Saint Helena. He said that would be ideal, but so far it hasn’t worked out. The journalist asked him about the most notable win by his island, and Glass replied that they have had few real matches against outside teams, but they were very proud to have a football series against a construction crew visiting from South Africa a few years ago. After a very close series, the Tristan team won the final game, just before the construction crew had to depart, 14 – 2.

Glass did admit that they watch the various international football competitions on TV, plus the games played in the English Premier League and the Champions League. Most members of the Tristan teams root for Manchester United, he admitted, but some players also like Arsenal and Liverpool.

The interviewer did not ask Mr. Glass how the Tristanians react to the occasionally violent football riots by fans of the European teams.