The tradition of holiday giving appears to be alive and well among the Hutterites of southwestern Saskatchewan. A news story four years ago described the way a number of colonies were cooperating with the local Salvation Army post in the small city of Swift Current, SK, by supplying tons of food for distribution to the poor. According to a recent news release, the Hutterite colonies in the province are still giving just as generously. 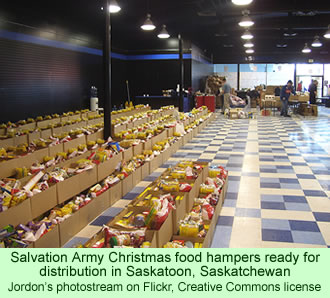 The recent news indicates that the need for assistance in that part of the province has been increasing at a rate of about 10 percent per year. The Hutterites have been responding to that need, and not just at Christmas time. Captain Michael Ramsay from the Salvation Army, at a brief ceremony marking “Hutterite Day” in Swift Current, said that the colonies had made donations to the Salvation Army on 121 different occasions during the course of the year.

He told the gathering that this year is the city’s 15th annual Hutterite Day, marking the significant contributions that the colonies have been making. They donate, he said, “thousands of pounds of vegetables, turkeys, cookies, pastries and so much more. … That support is such a blessing.” He indicated that the food the Army provides to the poor is only possible through the generosity of the colonies.

Captain Ramsay said that the number of people utilizing the resources of the Salvation Army in the city has been increasing, but the numbers of repeat users have been dropping. Several businesses have also been pitching in by providing financial support and by helping distribute the food donations to the poor. Their representatives were at the ceremony. Last year, he said, the Army had provided 200 families with Christmas hampers, and this year 225 had signed up for them. The distribution of the food hampers was scheduled for last Thursday, December 20th.

Swift Current Mayor Jerrod Schafer attended the ceremony as well. He urged more people to become involved in holiday charitable giving, and he offered a special tribute to the Hutterite colonies “on behalf of our entire community and residents.” More than 20 colonies have provided support for this program, the mayor said.