The Big Sky Hutterite colony, located in northern Montana near the Canadian border, has decided to take its dispute with the state to the U.S. Supreme Court. 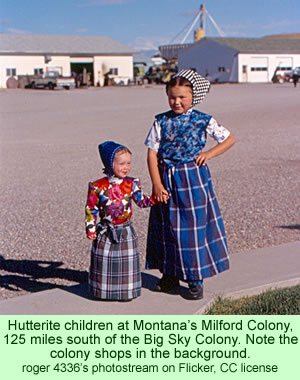 Montana passed a law in 2009 which the initiating legislator admitted was designed as an anti-Hutterite measure. Corporate lobbyists advocating the new law won over the legislature in part because the Hutterites don’t lobby. The law requires colony businesses to provide workers compensation in case of injuries on the job, even though, as members of the colony, they are actually not employees and do not receive any wages for the state-mandated compensation to protect.

A lower court upheld the Hutterite view in a suit filed by the Big Sky Colony, which claimed that the law is discriminatory and violates Hutterite freedom of religion. But in January this year, the Montana Supreme Court supported the state by a five to four vote, deciding that the law does not violate their freedom of religion. It merely regulates their commercial enterprises. The Hutterites argue that their communal way of life is an integral part of their religious values, and that their colonies can only function with people working together on a variety of colony businesses.

Anti-Hutterite groups argue for the importance of fairness, for “leveling the playing field,” by requiring them to pay for workers compensation. But that belief ignores the inescapable fact that the non-Hutterite businesses—primarily construction firms—have to pay their workers, and the colonies do not.

The Becket Fund for Religious Liberty has decided to support the colony in launching an appeal to the U.S. Supreme Court. As Luke Goodrich, an attorney at the Becket Fund, explained, “this case involves the right of internal church governance. Hutterites have been living in accordance with their religious beliefs for 500 years.”

He added, “they all take a vow of poverty, they hold all of their possessions in common, and they vow not to use the secular legal system against each other. But the new workers compensation law would violate all of those teachings because it would create a property right for individual members, which all members vow not to have.”

Goodrich adds that the case should give the Supreme Court the opportunity to resolve the different ways the U.S. states view the meaning of the free exercise of religion.

The Becket Fund’s website provides further amplification of its perspectives on the case. “The Hutterites are a peaceful and industrious people who have lived every aspect of their lives in religious communities for almost 500 years—eating meals in a communal dining hall, educating their children in a communal school, wearing the same homemade clothing, and working together on a communal farm,” it says.

The website goes on to provide a sophisticated, legal argument for the Hutterites. “The new law would force the community to violate its 500-year-old commitment to holding all possessions in common,” it says. It argues that the law is pointless, since the colonies already cover all possible expenses, such as medical costs, for members for whatever reasons, so the requirement that they must provide workers compensation doesn’t help Hutterite laborers in any way. It just forces them to violate their religious beliefs by possibly putting them in a position of taking hostile actions against the colonies where they live and work.

The Becket Fund provides additional materials about the case, including another quote from Attorney Goodrich: “This law proves the danger of allowing corporate lobbyists to prey on an ancient, peace-loving religious community.” He’s done his research well.