According to a Lancaster County news report last week, a group of nearly three dozen Anabaptists returned from a visit to Israel during the last week of November. The Amish, Mennonite, and Hutterite people from Pennsylvania, Ohio, Indiana, Idaho, Canada, and Montana traveled to the Holy Land to try and develop positive relationships with the Jews. It was the third such trip by the group. 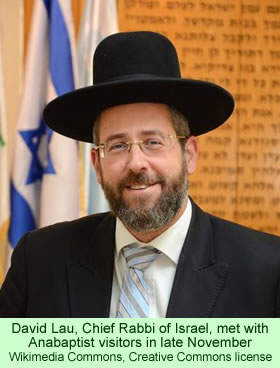 The news story focused on some Amish (or excommunicated Amish) people from Lancaster and Lebanon Counties, Pennsylvania, and their reasons for taking the trip. Apparently they wanted to tell the Israelis that they are sorry for the way Christians have treated the Jews over the centuries. They acknowledged that not only Christians in general, but members of Anabaptist communities in particular, had hardened their hearts to the suffering of the Jews during the Holocaust—and throughout history.

Steve Lapp from Ephrata, Jonas Stoltzfus from Paradise, and Aaron Lapp, Jr., from Gordonville, all spoke about the value of their trip. They expressed their remorse about the history of Christian/Jewish relations. Stoltzfus acknowledged that there had not been much outreach to the Jewish community right in Lancaster County, but he said there had been a trip to a Hasidic Jewish community in Brooklyn, New York, in 2008.

After the trip to Brooklyn, the group organized a trip to Israel in 2010. The visit in 2013 was their third to the Holy Land. The trip organizers see numerous similarities among conservative Jews and conservative Anabaptists: distinctive styles of dress, strong family and community values, a respect for hard work, and a firm focus on the wisdom of the Old Testament.

The trip accomplished more than just gestures of good will to Israeli and Jewish leaders. Participants were pleased to be able to “walk where Jesus walked, where David walked. It made it very real,” said Steve Lapp. They visited Nazareth, the City of David, the Old City in Jerusalem, the Yad Vashem Holocaust museum, and the Masada. They went out in a boat on the Sea of Galilee.

One of the highlights of the trip was a visit with the Ashkenazi Chief Rabbi of Israel, David Lau. The group was singing hymns while waiting for the arrival of the Chief Rabbi. When he entered the room, he welcomed the visitors warmly and requested an encore of the hymn, “Marching to Zion,” which they had been singing as he came in.

Rabbi Lau concluded the meeting by blessing the Anabaptists and praying for peace among all peoples. The Jerusalem Post wondered if this may have been the first time that a Christian hymn had been sung in the office of the Chief Rabbinate in Jerusalem.

The news article in Lancasteronline.com indicates that Jonas Stultzfus was excommunicated from the Amish Church three years ago. From the website of the Lapp family, it appears as if Steve Lapp and some of his relatives left the Old Order Amish society in order to pursue a mission of faith healing. They state on their website that they live in motor homes and travel around the country to preach their message of “overcoming the past, walking in forgiveness, experiencing healing, and maximizing our potential in the Kingdom of God on earth.”

While some aspects of what the group is doing, such as flying to Israel in a modern jet, may not meet the approval of the Old Order Amish districts, their messages of repentance, forgiveness, and reconciliation are very much in line with traditional Anabaptist values.