The Star, a Malaysian newspaper, ran a feature story last week by Ann Marie Chandy about the celebration of Christmas in a Semai village in Perak state. The author does not identify the village by name, nor does she indicate what percentage of the community is Christian. But her report conveys the charm of the Semai people working with church members from a Malaysian city to celebrate Christmas together. 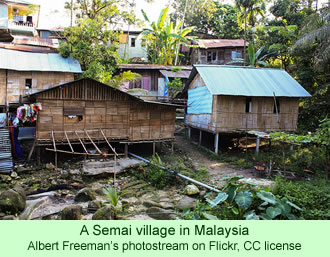 The story began when a group of people in her church decided to embark on an outreach project to a Semai community, though not through donations of actual gifts. Instead, a community worker named Jasmine Adaickalam advised them that the most effective way to reach out would be to work together on projects instead of just giving gifts. That would respect the Semai culture and ways and would enrich their sense of self worth and dignity.

The church group formulated a program in which they wanted to feel as if they had “adopted” the Semai community. The Semai in the chosen village formed a committee of their own to work with the church members, so they could contribute their ideas as to what was needed.

The church members had their own agenda, the author admits, to instill a love of learning in the children. They also wanted to encourage community elders and leaders to develop an appreciation of their rights so they could help keep the community healthy. The Semai village of about 150 people has neither electricity nor a piped in water supply, and the children don’t attend school.

The combined groups decided to work together to put on a Christmas program in the village, one which would reflect the talents and perspectives of the Semai themselves. After months of planning, the village put on their Yuletide pageant the Saturday before Christmas. But unlike such celebrations in other parts of the world, this Christmas event would incorporate traditional Semai approaches. The journalist was impressed by the results.

In order to put on a nativity play, the Semai children, ages 6 to 12, crafted unique headgear which they wove out of palm leaves to indicate the different characters and roles in the age-old story. The shepherds, for instance, wore donated football jerseys, but their headgear indicated their special roles.

Then they sang the familiar carols, such as “Angels We Have Heard on High”, in the Semai language. The people made percussion instruments out of bamboo sticks to accompany the singing. They had built benches for the guests to sit on in a tent which kept out the rain. The city people, who had come out to the Perak rainforest by bus, brought face paints and ice cream, and they helped organized a hockey match.

The writer was impressed with the confidence of the children as they performed their parts, plus the organizational ability of the adults who helped plan the event. She appreciated the welcoming spirit of the community toward the city visitors.

Ms. Chandy includes in her report a half dozen fetching photos of the Semai children, their community, and their Christmas tree, a local shrub with woven ornaments on it.