Bobo Tsamkxao #Oma, Chief of the Ju/’hoansi Traditional Authority, blamed teachers and school authorities for the failures of many Ju/’hoansi kids in their schools. He decried the fact that they did little to motivate the children to do their schoolwork. 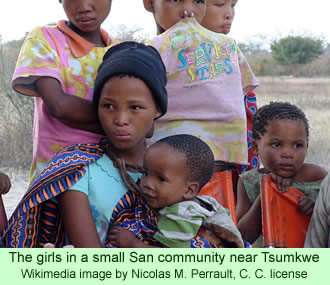 The chief spoke at a public meeting along with Anna Hipondoka, the Deputy Minister of Education, Arts and Culture of Namibia, who was visiting the community on a familiarization tour. Only four out of 87 grade 12 students in the Tsumkwe Senior Secondary School passed in 2014. According to a news report about the meeting last week, Mr. #Oma particularly blamed the teachers for the high failure rate. In 2014, the school ranked last in the entire nation among senior secondary schools.

#Oma blamed the school boards as well as the teachers for not communicating with the parents about the absenteeism of the children. The problem, he said, was that the parents were off in the bush gathering food and they only learn that their children are no longer attending school when they return to their communities. The teachers and school boards should get to know the parents and communicate with them more effectively, he argued, so that when children are absent, they can contact them. He said the education system is effective enough, but those who are supposed to implement the schooling are failing.

He identified some specific issues. He alleged that the teachers are going out drinking with the kids at the cuca shops in Tsumkwe. He also claimed that the adults are embarrassing the students in front of others by calling them dirty. They needed to understand, he said, that many of the Ju/’hoansi are very poor, and if the kids are shamed in front of others, they’ll stay away from their schools. Members of the community who attended the meeting strongly supported his views.

Afterwards, Ms. Hipondoka met with the teachers of the secondary school and asked them to set examples for the students by not drinking with them. However, she did praise the ones who taught under trying conditions in the rural schools.

According to another news story about the meeting, Ms. Hipondoka said that the parents told her the reason so many of their children drop out of schools in the region is that they are located so far from their homes. Some children attending one of the primary schools have to walk about 50 km to reach school, where they stay during the week. When they walk home for the weekends, they are often too tired to walk back to school again for the next school week. She also complained about the lack of adequate hostel facilities and the lack of a good supply of drinking water at the some of the schools.

A news report four years ago told a similar story: of parents who generally don’t care much if their kids get an education, of discouraged, poorly trained teachers, and of an education system in disarray. The poor education of the children in the Ju/’hoansi society has again gotten high-level attention, but it is not clear from any of these news story what really concrete measures are being taken.

Scholarly literature, particularly the outstanding recent book by Biesele and Hitchcock (2013), provides the context for understanding the problems. In some of the peaceful societies, such as that of the Ju/’hoansi, giving and receiving networks are extremely important, so many parents try to raise their children within that spirit.

In that context, the traditional Ju/’hoansi educational system that served them well for millennia emphasized an oral-learning process, focusing primarily on creativity and learning through hands-on experiences at the group level, rather than on achievements by individuals as formal schooling often requires. Notwithstanding that issue, Biesele and Hitchcock (2013) argue, the Ju/’hoansi have significantly improved their schools over the past 30 years.

In their book, they quote Mr. #Oma’s reactions in 1987 to the schooling situation he saw at that time. He expressed utter discouragement because the Ju/’hoansi children then feared going to schools because they were beaten at them. He said it was discouraging to see the children skipping schools because they only represented pain to them. In contrast, the schools are much better now.

Biesele and Hitchcock (2013) describe dramatic improvements in the Ju/’hoansi schools, facilities that they opened themselves and over which they maintain community control. In contrast to the news stories of 2011 and of last week, the two scholars maintain in their book that the five schools started and maintained by a Program called the Village Schools Project have been enthusiastically supported by the Ju/’hoansi communities and that they are basically a success.