On June 8 the Tristan Islanders posted on their website an ad for a position in the government of the island for a “Police Assurance Officer.” In the course of the ad, the island administrators preparing it didn’t mind expressing—modestly of course—their pride in the fact that the place is still relatively free of crime and violence, as it always has been.

The job description includes the assertion that “crime is low on Tristan.” It modestly states that while there is a magistrate’s court, it only sits once or twice a year. The paragraph concludes, “Policing on Tristan takes community policing to a new level.”

The Police Assurance Officer will help the existing policeman on the island with policing in the neighborhoods and working with other officials to ensure that essential adult and child safeguards are being properly followed. The new officer will work with the current police staff in establishing youth groups in the community; he or she will help identify, nurture, and mentor new recruits to constable positions.

And perhaps just as critically, the new officer will work with the existing staff in seeking to reduce and prevent crime on the island. The ad singles out the need to focus on “petty crime and crime related to alcohol abuse.” The existing police service on the island consists now of a full-time inspector, two special constables, and an administration officer. They are also responsible for customs duties, immigration, search and rescue operations and disaster management.

A news story from January 2010 about Conrad Glass, at the time serving as policeman for the island, provided some background about crime and policing on Tristan based on a news report in The Guardian. Officer Glass was in the UK for training in community policing. He told the Guardian reporter that the jail on the island is not really usable as such—it would not adequately hold a felon.

He said that crime is almost non-existent, so the concept of community policing, for him, usually consists of not getting involved in things. Since he doesn’t drink, he avoids the pub in the Settlement, normally preferring to sit home with a book. He did admit that a fight broke out once in the 1970s on a fishing vessel, and since then problems have been caused by visitors on their yachts. 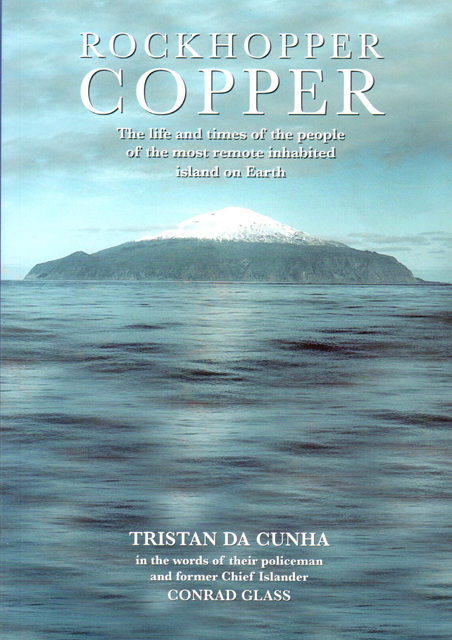 The report from nine years ago indicated that Glass was hoping to retire in five years, but no one else, including his two deputies, is interested in taking the job. It appears from the Tristan website list of government departments that officer Glass is still the head of the island police force. Perhaps he is hoping to finally retire and have more time for his reading. If he does, one might hope he will have the time to write another book to update his charming work Rockhopper Copper, which was first published in 2005 with a second edition released in 2011.