The Tristan Islanders celebrated what they call “Old Year’s Night,” the last night of December, with the usual revelry this year—and with a couple of effective speeches thrown in. Descriptions and photos of the event were posted on the Tristan website last week. 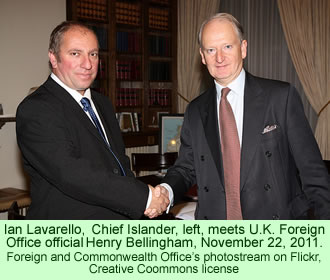 The Chief Islander, Ian Lavarello, spoke about the events of 2012 in a most inspiring fashion. He highlighted the celebration on the island of the Queen’s Diamond Jubilee and the publicity that the Tristanians gained worldwide for their unusual way of commemorating the event—a bonfire composed of a large pile of invasive plants. “It’s a good indication of how Tristan’s unique way of life is now being recognised as something very special in the wider world,” he said.

Lavarello also singled out the construction of the thatched roof house, built cooperatively by a group of Islanders and intended both as a museum piece for visitors and a way of keeping alive the traditions of the past for younger Tristanians.

The Chief Islander described an agreement reached with South Africa, which provides for the help that country will continue to give Tristan in educating Tristanian children, beyond the lower grades that they can handle in their own settlement. The Islanders do not want to avoid the challenges of modern life. Lavarello said that, hard as it is for the youngsters to leave their island homes, even temporarily, it is only by having children achieve their highest potentials that Tristan can hope to survive and prosper in the future.

Mr. Lavarello dealt with several practical matters in his speech. He indicated that the island’s claims against the companies that insured the M.S. Olivia, the huge bulk carrier that ran aground on Nightingale Island in March 2011, have all finally been settled. He also discussed the improvements that are sorely needed for the island hospital and the harbor.

Mr. Lavarello was not, himself, able to attend a meeting of the Joint Ministerial Council in London during the year, but the U.K. Representative, Chris Bates, stood in for him and made some progress on those major Tristan issues. The representative was able to discuss them with the Minister for the Overseas Territories, and then with the Prime Minister, David Cameron. He reported back to Mr. Lavarello that Mr. Cameron seemed to be well versed on the issues related to a possible replacement Tristan harbor.

The Chief Islander said that island knitters are now making products for export to New Zealand, and that the island has a new firm that is designing and marketing their stamps to collectors. And, most heartening, the finances of the island appear to be improving—at least they are “turning the corner,” he said.

The Island Administrator, Sean Burns, opened his speech with a message from the Governor of St. Helena, Ascension and Tristan da Cunha, Mark Capes. Governor Capes said that he had had an audience with the Queen earlier in December, and she had asked about the progress on Tristan. Governor Capes told the Queen that he will be making his first visit to Tristan in November 2013.

Mr. Burns reflected on the positive events of the past year, much as Mr. Lavarello had done. He singled out the settlement of the case over the Olivia, the need for a new and better harbor, and the completion of the thatched house project. On the latter, he said that the team working on the thatched house demonstrated “a lesson to everyone in what hard work, skill and team work can achieve.”

He also mentioned the financial situation of the island, but his take was that while it had gotten better, “it was still precarious.” However, the Island Council was able to give government employees their first salary raises in many years. The First Night revelry of the Islanders, referred to as Okalolies, a long-time tradition of Tristan, evidently occurred in the usual spirits again this year. The Tristan website posted some pictures of the mummery.