Numerous news stories at the end of last week focused on forgiveness, unusual in an autumn dominated, in the United States at least, by unforgiving attacks on political opponents. The occasion was the 10th anniversary, on Sunday October 2, of the Nickel Mines tragedy, when a deranged man murdered five Amish girls in a one-room schoolhouse in Pennsylvania.

Perhaps a dozen news stories last week replayed the details of the tragedy and the remarkable forgiveness that followed immediately afterwards. They provided some sketches of what has happened since 2006 to some of the people involved. The details about the events ten years ago are easy to find, particularly since the spontaneous forgiveness displayed by the Amish may have been the most newsworthy occurrence involving any of the peaceful societies over the past decade.

Early reports back in 2006 covered the events of that bright, beautiful October Monday morning in eastern Lancaster County. Charles Carl Roberts, IV, the driver of a milk truck who lived in the neighborhood, barricaded himself with an arsenal of guns inside the Nickel Mines school. He ordered the adults and the boys to leave and began shooting the girls. As the police arrived outside the schoolhouse, he shot the ten girls, five of whom either died instantly or later in the day, and five survived. Then he killed himself. The news reports speculated about how the Amish were going to handle the tragedy.

The story and the attention of the media quickly changed into amazement at the fact that the Amish community, including the families of the murdered girls, started visiting the family of the killer, Mr. Roberts. They expressed their sorrow at the tragedy and their forgiveness for what their husband and son had just done. One Amish man, visiting the home of the killer, hugged the man’s father for quite a while as a way of expressing his sorrow and his condolences.

The international media wrote about 2,400 news reports in the week that followed the tragedy, focusing on the drama of Amish people forgiving a killer—not after meeting and discussing what they should do, but spontaneously. The Amish themselves were puzzled at the international attention they were getting because of the way they had instantly forgiven Roberts. As Donald Kraybill, famed expert on the society, said, “a number of Amish people told me that it’s the normal Christian thing to do, just standard forgiveness and ‘everybody does it.’” Of course, readers and viewers around the world were aware of the value of forgiveness and its importance in fostering peaceful relationships, but what was so rare was to witness it given in such a spontaneous fashion and after such a horrific event. Millions of people were fascinated.

At the funeral for Roberts five days after the tragedy, about half the mourners were Amish. They greeted the family of Mr. Roberts as fellow sufferers—they had just come from the cemetery where they had buried their own girls a few days before. The father of one of the murdered girls was quoted as saying, “Can you imagine what it would feel like to be the father of a killer? [The] pain would be 10 times worse than our pain.”

Donald Kraybill, Steven Nolt, and David Weaver-Zercher, each a prominent Amish expert, soon published a book about the Amish practice of forgiveness and the lessons of the Nickel Mines tragedy. Titled Amish Grace: How Forgiveness Transcended Tragedy, it sold widely. As reviews of the new book pointed out, the Amish realized that the family members of Charles Roberts were also victims of his crime. The Amish established a fund at a local bank to assist the Roberts family. An Amish woman said on a national television show, “We have to forgive him in order for God to forgive us.” 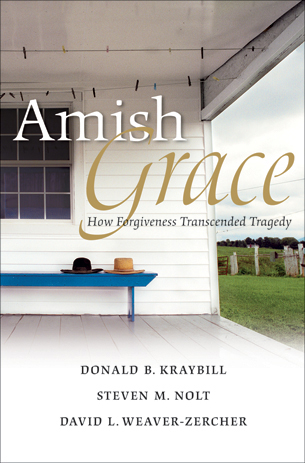 The book Amish Grace makes it quite clear that the Amish take this teaching by Jesus quite literally, as they do his other lessons about acting peacefully, turning the other cheek, and not resisting aggression or authority structures. The authors quoted the father of one of the dead girls: “forgiveness means giving up your right to revenge (p.116).”

The events of early October 2006 and the scholarly book that followed it inspired at least one play, a televised movie, academic conferences, and a vast amount of additional literature. Many individuals remain fascinated by the phenomenon of people actually practicing their beliefs, rather than just praising ideals but minimizing them as impractical in today’s violent world.

Of all the news stories that were published last week about the horrors inflicted on Amish children in their school and the aftermath, perhaps the best was a detailed report in the Washington Post this past Saturday morning. The Post noted how, on the day of the killer’s funeral, about 30 Amish men and women, some of whom were parents of the victims, stood at the cemetery and formed a wall with their bodies to block the views of the media. And four weeks afterwards, with the cameras of the world finally gone, the families of the girls invited the Roberts family to a meetup in a local fire hall. They told them that they were all grieving for their losses.

The healing and forgiving process has continued to this day. Terri Roberts, mother of Charles, has continued to be personally involved with the life of 16-year old Rosanna King, the youngest girl in the Nickel Mines school ten years ago. While she survived the bullet, she is nearly brain dead now and still lives in a wheelchair. The Post describes how Terri has gone to the King home almost every Thursday evening to help care for and interact with Rosanna, forming a strong personal bond with the child. The kind of outreaching goodness exemplified by the Amish 10 years ago has clearly been communicated to the neighbor whose son committed the awful shooting. And recently, with Terri herself now severely ill, the local Amish are helping her out in her home, repaying the visits.

The story of Amish forgiveness is not just an event that happened 10 years ago and now just reverberates among the ageing participants. The Amish keep perpetuating their message about the value of forgiveness. Two months ago, local news sources in Lancaster County reported on a unique meeting that had just been held in the county between one of the Amish bishops, some other leaders in their community, and some representatives of northeastern U.S. Native American tribes.

The point of the meeting was for the Amish leaders to apologize for the way their ancestors had treated the Native Americans in the early history of the U.S. and to ask for their forgiveness. The Amish had never fought with the Indians but they had taken their land and they asked the descendants of the Native Americans present at the event to forgive them for that injustice.

Among the various Amish and Native American leaders who spoke at the ceremony and were quoted by the news report, the words of Shelia Hansen, a Shawnee Indian from Virginia who formally accepted the bishop’s apology, were especially noteworthy. “You raised the bar for this country, for all humanity, for forgiveness,” she said, referring to Nickel Mines. “As we came in here, the wind blew really hard, and it came through the trees,” she said. “And I believe that the spirits of our old ones came by the wind, and they spoke, and this is a good day.”

Perhaps the spirits of Ms. Hansen will visit others and promote a forgiveness that will lead to good days for the rest of humanity.