On Tuesday last week, Lepchas celebrated an important festival in numerous villages of Sikkim with dancing, singing by masked performers, and displaying models of their sacred mountain, Tendong. The Northeast Today published an article on Wednesday about the annual festival, called Tendong Lho Rum Faat, as did a number of other websites.

In Daramdin, a historic community where a Lepcha myth says their ancestors tried to erect a stairway to heaven, the festival included a presentation by a minister from the Sikkim state government, Mr. R. B. Subba, head of the Human Resource Development Department. He reminded the gathering of the importance of the history and culture of the Lepcha and the value of the Tendong Lho Rum Faat festival in helping preserve the spirit of the people.

Mr. Subba told his audience that the project of reconstructing a Stairway to Heaven and building an adjoining museum at Daramdin, promised by the state government in 1995, revived in 2010, and revived again in 2014, would be finished soon. He discussed the steps that have been completed so far. The program for the festival in Daramdin included traditional foods plus arts and crafts stalls that were particularly attractive to the public. The program began with a traditional prayer conducted by a Bongthing, a high priest. It also included the launching of a Lepcha Language Book, according to the Northeast Today article.

In the Lepcha communities where it is celebrated, the festival begins with prayers to Mount Tendong, located in Namchi in South Sikkim, the place where the Lepcha people, according to a myth, were saved from drowning after 40 days and 40 nights of flooding. It obviously bears a lot of similarities to the story of Noah’s ark in Genesis and the role of Mt. Ararat where the ark came to rest. A monastery is located at the top of Mt. Tendong where the Lepcha celebrate the festival every August.

Many Lepcha believe that the prehistoric flood was caused by a dormant volcano, the eruption of which prompted the deluge. Mt. Tendong arose miraculously out of the chaos and the Lepcha were able to climb it and save themselves. The people commemorate the myth in many of their villages, especially at Tendong itself, expressing their gratitude toward the deity who saved them. The people make models of the holy mountain for the facades of their homes for the occasion. They believe that the beneficence of the deity will help keep them healthy for the coming year. 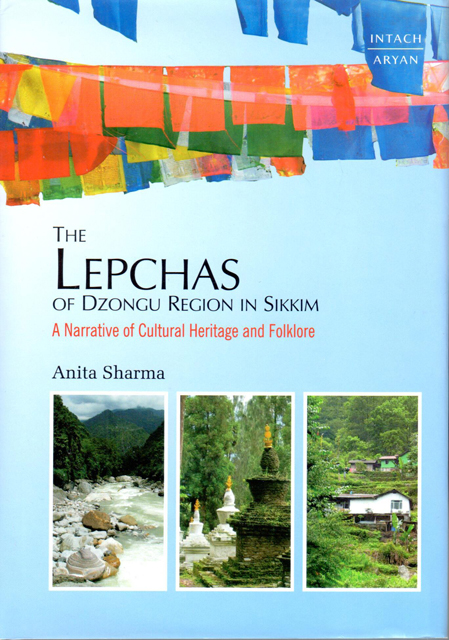 In the chapter on ceremonies and festivals of her book The Lepchas of Dzongu Region in Sikkim: A Narrative of Cultural Heritage and Folklore, Anita Sharma (2013) described briefly the celebration of what she called Tandong Lho Rum Faat. The entire Lepcha community in the area gathers annually on the appointed day to pray, led by the Bongthing, for bounties in the coming year. Essential ingredients for the celebration include flowers and what the author termed the lofit. A lofit, she explained in an end note, is a special tray made of bamboo that is open on one side, covered with banana leaves, and filled with carefully prepared foods: three rows of rice, bits of fish, a bird that was killed by a catapult, ginger, ghee, and so forth.

Tendong, which in the Lepcha language means “Upraised Horn,” is located near the community of Damthan, in South Sikkim, from which a trekking route of about 6 km leads up to the peak. The trail goes through a lush forest providing views of wildlife and spectacular flora. The top of the hill, at 8660 feet elevation, gives views of the Eastern Himalaya ranges, Darjeeling, Gangtok, and the plains of West Bengal to the south. As a website extolling the importance of Tendong, the Lho Rum Faat festival, and the beauty of the surrounding countryside gushes, “nowhere [in] Sikkim offers such an astonishing view.”