Women from the Baker Hutterite Colony near MacGregor, Manitoba, played the last ice hockey game of a ten-year series of contests with a local women’s team, the MacGregor Iron Maidens, on Monday evening the 17th. The CBC News posted a fascinating story about the contest and its meaning for the two communities.

Tirzah Maendel, who plays with the Hutterite team, was one of the organizers of the series of annual games 10 years ago. She told the CBC that there was very little interest in the first contest—only a few spectators turned out to watch the game—but the local interest and the size of the crowds attending has increased dramatically each year since then.

Ms. Maendel speculated that part of the appeal for the annual local game might be the fact that the Hutterite women lace on their ice skates below their long, traditional skirts while their opponents are clad in standard hockey gear. “I think word got out and people were more intrigued at us being able to play in our skirts,” Maendel told the reporter.

The Hutterite lady said that the growth of interest in the annual games and their impact on the community has been astonishing. A few years ago, the team members decided to use their talents to raise money for charitable causes. One year it benefited the women’s center in town; another year the event raised money to buy equipment for a playground in MacGregor, which is located about 120 km. west of Winnipeg.

This year the teams decided to raise money to help two immigrant families from Syria that are living in town. They decided to sell Syrian foods at the game on Monday evening such as shawarma and falafel.

Ms. Maendel said that many local people support both teams equally so she is convinced that they help foster good relations within the community. She frequently has people stopping her around town, telling her that they have been inspired by the Hutterite women, and saying that they have started skating because of the games. “It’s been awesome to get that type of feedback,” she told the reporter.

Reflecting about the 10th and final game of the series, Maendel said that initially other Hutterite colonies did not approve of the games. “It’s definitely raised important discussions and healthy conversations, because not all Hutterites are supportive of this game or the idea that women do play,” she said. “It hasn’t been easy.”

Her comment prompts some questions. What does the broader literature on the Hutterites say about their attitudes toward organized sports? And just as important, how supportive are the colonies toward women and girls getting involved in games and sports? 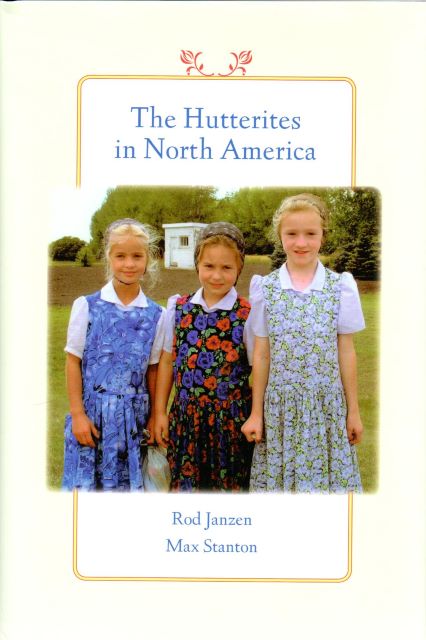 The answers to both questions appear to vary among the different colonies and how conservative their leaders are. Rod Janzen and Max Stanton in their book The Hutterites in North America (2010) make it clear that for most Hutterites, recreational activities such as participating in sports is frowned upon. A teacher in one conservative colony commented, “there is no time for sports. This takes time away from more important things (p.164).”

Yet the reality in many colonies differs from such stated ideals. Janzen and Stanton go on to say that many Canadian Hutterites avidly follow the ice hockey games while the people in the American colonies often follow baseball and football. And though the workloads for adults may not allow much time for organized sports, many colonies allow their children to play softball, hockey, baseball, and kickball. The authors write that some colonies have sports fields to accommodate the sporting interests of their members and a few even have gymnasiums.

Lisa Marie Stahl’s book My Hutterite Life effectively deals with the issue of participation in sports by colony women and girls. Her experience was that there are many opportunities for girls to become involved as much as they wish. In a section describing the activities of colony young people, she writes, “The young girls’ favorite sport is a game of baseball or catch with their friends (p.42).” They fit in their interests in sports along with helping older women in their gardening work and canning vegetables.

In other words, the girls mix pleasant sporting activities with work as much as they can. A bit later in the book (p.88) she reviews her childhood memories, such as her favorite winter activities: big snowball fights during recess periods in school and sled races. The boys and girls participated in the teams they formed.

The CBC News story last week adds an important perspective to the growing literature about the Hutterite colonies in North America. Ms. Maendel is satisfied with her work in promoting ice hockey for the women at the Baker Colony. It appears to fit in with a pattern of broad female activity, if not gender equality, at the colonies. She concludes, however, that 10 years of the games is about enough. Time to play the last game with the other team in town, then end the series. See what other activities will inspire them next.